Under the Rada will be two tented camps – military and civilian 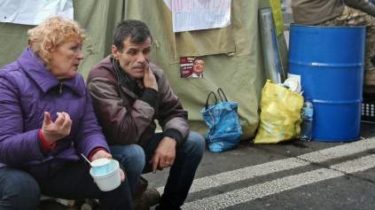 The protesters outside the Verkhovna Rada will make two tented camps – military and civilian.

This was announced by MP from the “Samopomich”, one of the organizers Yegor Sobolev, reports “Interfax-Ukraine”.

“The military doing military camp: closed, with discipline and security, located in the place where there is no good angle for a sniper scope. That’s the area the best (on the carriageway of the street Grushevskogo – ed). Civil we offer to stay in the Park, as proposed by Netpolice”, – Sobolev noted.

He added that on the Grushevsky street “remains a place for socializing, meetings, discussions.”

Now near the building of Verkhovna Rada is more than 200 people. The participants in the camp are knitting scrim for the ATO.

The stretch of road near the Parliament is still blocked. The territory from the street Lipsky and mulberry protect employees of the national guard and police.

Videocast political forces and organizations refused to protest at BP, but the tents do not become less