APU fire in response to shelling of militants and wounded Ukrainian military. How was the day in the area ATO 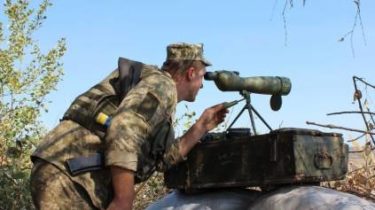 At the end of the previous day, October 21, the situation in the ATO area has not changed significantly.

Single fighters continue shelling Ukrainian positions from infantry weapons along the line of demarcation, the press center of staff ATO in Facebook.

So, on Donetsk the direction with almost 18 hours until midnight fighters beat from various types of grenade launchers, heavy machine guns and small arms at the strong points of ATO forces near Avdiivka and Butovka. Of the same arms in the evening hours the mercenaries were shelling our fortifications near Kamenka and Verkhnetoretsky.

At the direction of Lugansk at the end of the day the enemy from heavy guns fired twice zakhysnykiv Novozvanivka and one of the defenders of Novoaleksandrovka.

#Topad #Foresnic #Donbas #spokesperson #statement the CONSTRUCTION of the PRESS CENTER of STAFF ATO IN 21.10.2017. At the end of the last…

Published by the Press center of staff ATO 21 Oct 2017

On the Mariupol direction under fire from enemy anti-tank and automatic grenade launchers hit the strongholds of Ukrainian army near Starognatovki and Talakovki.

In General, over the past day militants 14 times violated the truce. 9 times fighters ATO harshly responded to the militants. In the fighting one of our soldier was injured.

We will remind, on October 18 the Ukrainian UAV dropped leaflets over Donetsk, where militants have warned that soon they will come for the Ukrainian army.