Under the Rada scuffle: police were not allowed on the rally equipment 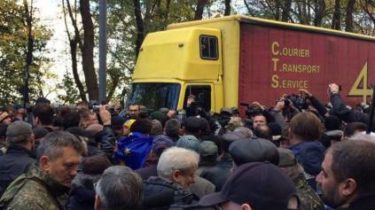 Near the Verkhovna Rada there was a skirmish between the participants of the meeting of Saakashvili and the police. Collision video on his Facebook broadcast the people’s Deputy Serhiy Leshchenko MFP.

According to the participants of the meeting during the Council, which began on Constitution square, the police blocked the truck with the sound equipment and did not pass it to the rally.

Near the Parliament started a brawl with the protesters by the police. Trying to smuggle a car with sound equipment. On the armored car, more precisely in the cab of the truck.

According to people’s Deputy Yuriy Derevyanko, the decision on the admission of transport to the scene according to the application filed by the organizers, was to take one of the leaders of the police Department in Kiev.

The protesters have repeatedly reported this from the scene. After the speech, Saakashvili and his supporters, the activists went to rescue the truck.

So near the building of the Parliament in Mariinsky Park, a fight broke out between protesters and police. From law enforcement tried to get explanations, and also asked them to skip the car.

According to people’s Deputy Serhiy Leshchenko, the protesters from the guards fired tear gas, and the car on Constitution square did not miss more than a day.

Later Leshchenko also said that with the help of activists still managed to move the truck and unlock the approach to it. Activists helped to unload the truck and move the equipment manually.

The members of the chamber under the Parliament allowed to manually move the sound equipment from the machine, which informed law enforcement officers are not allowed on Constitution square pic.twitter.com/wDFUi6lzSt

National guard and police blocked the car with sound to protest

Recall, 17 July in Kiev representatives of different political parties organized protest action under walls of the Verkhovna Rada for political reforms. The government quarter was blocked by police officers.

The evening of October 19, the demonstrators dispersed, but near the Verkhovna Rada left the tent with the “organizing Committee” meeting. Activists of “movement new forces,” Mikheil Saakashvili decided to continue the protest.