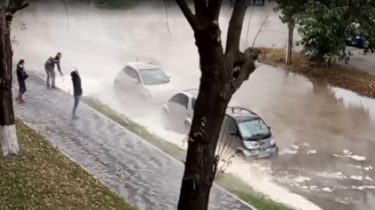 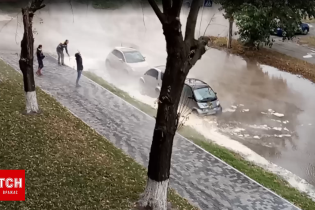 In the center of Kiev there was water damage. At the intersection of street and Laboratory burst pipe with hot water.

As the reader reported Dniathe incident occurred at about 14:45 on Monday, October 23.

Video settings Kyiv boiling water that the pressure gets out of the ground, flooded several parked cars

According to eyewitnesses, the street for 15 minutes pour boiling water over. The accident damaged several cars.

The owner of one of the parked cars had to go into hot water knee deep to get in the car and try to save him.

In turn, the team of the utility, which later arrived on the scene, has not been able to figure out which Agency is responsible for the incident.

Breakthroughs running underneath the streets of the pipes – a frequent phenomenon for the capital. So, another large flood occurred on the eve of Independence Day in Solomenskiy district of Kiev.