Head Gosgeokadastra was removed from the post due to abuse 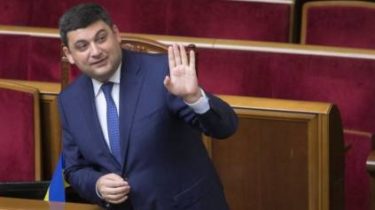 Acting Gosgeokadastra Oleg Svaha was suspended from duty because of allegations of abuse.

This was stated by Prime Minister of Ukraine Volodymyr Groysman during the meeting of the regional development Council.

“Mr. Zwach, from this moment on you are relieved of performance of their duties,” – said Groisman.

According to the head of the government, will soon be under investigation.

“Tomorrow I will appeal to the Prosecutor General, NAB, demanding to bring against you, against all your heads of regional administrations, to investigate it, and you will sit because you have no right, none! And I insist that what you do today, if it is true – you are parasites in the present context of our country. And you do not have forgiveness. Guilty – will sit. Point”, – he stressed.

Note Zwach was suspended after the Chairman of Vasylkiv district state administration of Dnipropetrovsk oblast Sergey Litvinov asked the President of Ukraine Petro Poroshenko to contribute to Kyiv Derzeitiger pulled their “looking” from the regions. In turn, Poroshenko instructed on its behalf and behalf of the Prime Minister to “looking” in General and “looking” Derzeitiger, in particular, was not.”

“I expect you today to the end of the day, specific facts, specific names of those who are “looking” in your districts and regions. I would like today to let me have it”, – said Groisman.

The head of Derzeitiger detached. The President sharply criticized for its opaque system and promised a responsibility to prokuratorow.

Earlier, in the Luhansk region detained the head of Gosgeokadastr, who demanded from the businessman more than a million hryvnia. The official wanted to get money for land.