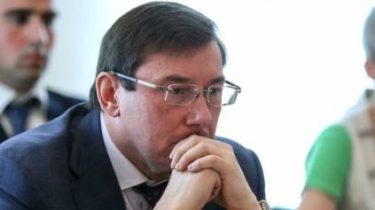 Prosecutor General Yury Lutsenko has declared the preparations for a military coup protesters under the Rada.

He stated this during a meeting of the regional development Council.

“The right to peaceful protest does not mean preparing for a violent coup that started a small group of people. Approximately 150-200 people, who, declaring himself the only righteous require the state to do only what they, with the support of Finance from abroad, and in due time I will prove it, they are funded from abroad… want to impose the Ukrainian state”, – he stressed.

According to him, protesters prepare caches of weapons.

“This they did not succeed. They will not pass. The Ukrainian government will be guided by the Constitution, laws and the will of the people and not some bunch of adventurers who want to make another coup for the amusement of the Kremlin”, – said Lutsenko.

He noted that the meeting involved “on tour without any nationality.”

“This person challenged the state, the answer to this will give law enforcement agencies”, – said the Prosecutor General.

Political rallies near the Parliament: who, what and why requires and which has been already achieved

Recall, October 17, in Kiev representatives of different political parties organized protest action under walls of the Verkhovna Rada for political reforms. The government quarter was blocked by police officers.