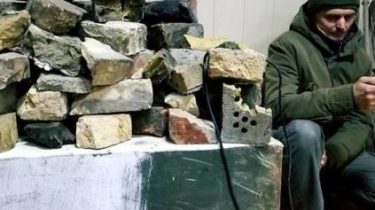 The people, who seized and destroyed the premises of Sviatoshynsky district court of Kyivcontinue to hold the barricades.

As the correspondent of TSN, now, the situation is relatively calm. After an unsuccessful assault by police representatives Nikolay Kohanivsky, which was expelled from the OUN, spent the night in the hall. They made a fire in the courtyard. Around the campfire they are trying to warm up.

Kohanivsky was summoned for questioning over the riots in Russian banks

It should be noted that hold the space for about 30 people. Now they expect a continuation of the court that was not determined before the measure Kohanivsky. As you know, Kohanivsky participated in shooting near Akademgorodok metro. Law enforcement officers at the scene in the grass found a traumatic pistol the PMR and spent cartridges of caliber of 9 mm. From the victim – tangential wounds in the back and leg (assistance was provided on site).

According to the detainee, he should have been let go, as time passed after the presentation of suspicion. However, the judge decided to send Kohanivsky in a detention facility. When he tried to withdraw, there was a conflict in which supporters of the controversial activist barricaded and remained with him till morning.