In Kiev closed the Dolphinarium 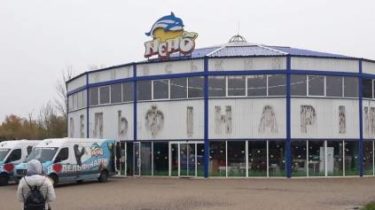 In Kiev closed the Dolphinarium “NEMO”.

This was reported on the website of the Dolphinarium.

“To compensate for the helplessness”: the children of Donbass began to save dolphins in the Black sea

On the website you can find the announcement of the administration: “Dear friends! Kiev Dolphinarium “NEMO” is not working. We apologize for the inconvenience”.

“One place of suffering and humiliation less” – so it’s commented Facebook user Sergei Foreman. He posted a photo showing that the building has removed the sign.

In the comments, users Express their joy on this occasion.

Earlier on the channel “NEMO” on YouTube it was announced the last show, which was held until 22 October.

We will remind, in France, have banned keeping dolphins in captivity. The owners of dolphinariums will either have to close or significantly limit contact of animals with visitors.