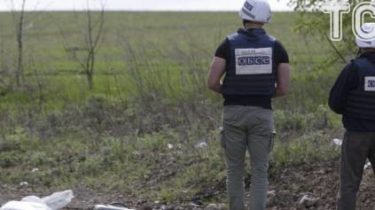 Militants occupied “DNR” in Donetsk fired at the drone of the Organization for security and cooperation in Europe (OSCE).

This is stated in the report of the observers of the special monitoring mission.

“On the morning of 23 October, while in the streets of Kobrin in the neighborhood Trudovskoy Petrovsky district “DPR” – controlled Donetsk (15 km on southwest from the city center), members of the patrol mission heard 4-5 rounds of small arms at 50-100 m to the East from its position – in the area where they were flying unmanned aerial miniport”, – the report says.

According to team SMM, the shots were made on the UAV, which observers failed to land.

“The mission has reported to the Joint center for control and coordination (JCCC) of the flight in one hour, and also about his intentions to make an additional flight,” added the OSCE, noting that the observers decided not to raise the drone into the sky a second time.

Earlier, the OSCE warned about the sudden escalation in the Donbas. The situation in the region is extremely unstable. So, for the past day in the area ATO killed four Ukrainian military, three soldiers were wounded. Evening and night fighters concentrated fire provocations in Donetsk and seaside areas.