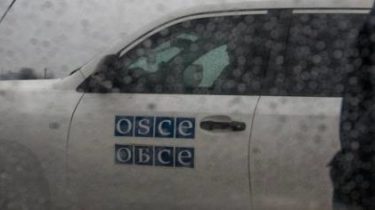 In the occupied part of Donbass fighters were aiming from a 12.7 mm machine gun in the car of the Special observers monitoring mission of the OSCE.

About it reports a press-service of the OSCE.

Noted, the SMM patrol consisting of two armored vehicles and six members, was stopped by armed men at a checkpoint near “DPR” – controlled settlement Verhnechusovskie at 09:57.

While the patrol was waiting to drive through the checkpoint staff the SMM observed partially covered with a heavy machine gun (caliber 12.7 mm) ten meters away from the first patrol car.

In turn, in a few minutes two men in uniform approached the gun, reloaded the ammunition and sent it directly to the first patrol car SMM. Subsequently, when the armed men moved the machine gun in the military car, they stopped and had zeroed on the first patrol car of the SMM 3-foot distance.

The patrol left the place at 10:16, continuing as planned, the movement into uncontrollable territory. The group returned safely to base in Mariupol at 16:15.

Earlier, militants occupied “DNR” in Donetsk fired at the drone of the Organization for security and cooperation in Europe (OSCE). According to team SMM, the shots were made on the UAV, which observers failed to land.