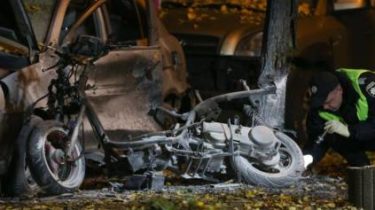 Law enforcement authorities announced the release of a deadly explosion that occurred near one of the TV channels in the capital.

This was during the briefing said the first Deputy Prosecutor of Kiev Pavel Kononenko.

“We are considering several versions of the crime. First, it was the voice of mister Mosiychuk, that’s attempted murder of MP, which was organized by the intelligence service of the Russian Federation. About the artist we will talk when install criminals. The second version is political activity Mosiychuk and his public position within the state. The third version – attempted murder of the Chairman on a personal basis, but we do not exclude other versions. There was still the analyst of the Ball may have been questions to the most Bale, we cannot reject the version about attempt at any political or public figure who could be at this time on the channel Espreso,” said Kononenko.

In addition, the version of the attack on the journalists of the TV channel is also the consequence of not excluded.