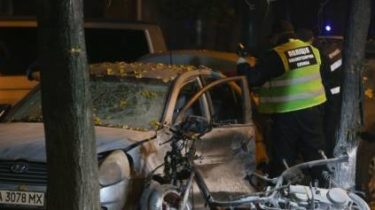 In the Internet appeared the video of the first minutes after the explosion, which injured folk deputatam Igor Mosiychuk, killing his bodyguard and a bystander.

Video posted on the channel dtp.kiev.ua.

So, the footage shows how the incident has working medics, helping the wounded.

We will remind, in the evening of 25 October, near the Studio of the TV channel “espresso” on the street Mickiewicz in Kiev exploded a car parked next to the motorcycle. The explosion injured five people, among them – the people’s Deputy Igor Mosiychuk and political analyst Vitaly Bala. Later the guard Mosiychuk died on the way to the hospital. The explosion qualified as act of terrorism, the investigation conducted by the security Service of Ukraine.