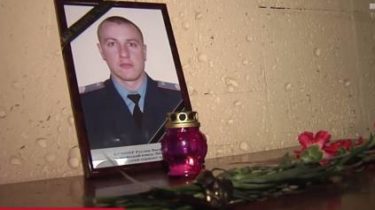 In the evening the coffin with the dead guard’s Deputy Chairman Ruslan Kushnir relatives took from the morgue. Together with friends and sister of the Sergeant of police was the boy’s mother, says the story TSN.19:30.

Woman in deep grief over the loss of her son. A black hearse drove the body of the guard in the dormitory, where Ruslan lived with the family – where everything is ready to bid farewell to him. On Friday the coffin will be delivered to the home for the guy Vinnitsa, where he will be buried.

Life is not black and white: he said that he killed the guard was a former Berkut officer

It was reported that Kushnir was not only a guard, but an assistant of the Chairman. Along with the MP he worked for about a month. He has served in the special forces “Berkut”, and on the eve of what Kushnir saved the life of the Chairman, standing between him and the explosion. The people’s Deputy Andrey Lozovoy said that Mosiychuk, together with his wife decided to take on the maintenance of the daughter Kushnir “and help her as a mother”.

Videogranny Mosiychuk, who was killed during the terrorist attack in the capital, buried in the winery