Burned in Kiev “house mother” before I fought Kachmala and Kohanivsky 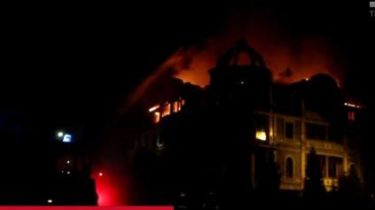 The cause of the conflict Nikolay Kohanivsky, who tried to bail Igor Mosiychuk, and Ruslan Kazmaly burned last night in the capital. The building on the outskirts, known as the “house mother”, caught fire around 3:30 a.m., according to a story TSN.19:30.

Trials by representatives of the “OUN” saved the life of the settlers – speaker volunteerism Oksana did not sleep, because I was writing press releases. She heard strange noises, saw fire and rushed to Wake people who were sleeping. Rescuers arrived at about 4:00 o’clock in the morning, but it turned out that the hydrant enough pressure, so the water had to get a ride. Only fighting left nearly three hours – that was enough to completely burned the roof and partially the third floor of the building.

Video settings the capital lit up the building, which was a conflict between Kohanivsky and Camalou

It was occupied by the soldiers of the battalion “One”, whose leader , Ruslan Camalou, there was a conflict, the leader of the battalion “OUN” Nikolay Kohanivsky. Because the first floor is occupied by the settlers, which he does. “We prevented them, they wanted to live on the ground floor, because here, at the time the patron for immigrants has made the conditions. They repeatedly told us: we will burn this house, we will we rid ourselves you will not live”, – says the resident-migrant Marina Aksenova.

“We all would be burned alive”: in Kiev, in a hostel for immigrants, a fire broke out

Camalu such accusations outraged. “It’s a trick to them: type, we are refugees, we do not to burn yourself. I went out and told the guys to leave so there was no provocation. I don’t know why burn the house when you are not there. I do not see sense in this,” he admits.

In fact, the house belongs to neither the one nor the other – a representative of the owner explains that have filed lawsuits for unauthorized seizure. “It was zalogowa property, it then became the property of our company. It was for sale, and now such a disaster happened to us”, – said Vladimir Malyarchuk, accompanied by police officers trying to assess the damage.

Fire affected IDPs sure that their dormitory was set on fire

House in the capital known as the “house mother” – until the Maidan, he allegedly belonged to the structures close to your personal banker fugitive Yanukovych. During the revolution the building was used as headquarters of hundreds of the barracks. And two years ago Kohanivsky brought two dozen people still in the construction directs the commandant Elena aji, which has some of paper that allegedly give it the right in this building to be no registration of ownership. However, the Bank who in fact owns the house, actively invites people to check out. But those to go anywhere they’re not going and looking for generators and film to tighten the burned roof.