Can shake hands: the deputies admitted as flirting in the Ukrainian Parliament 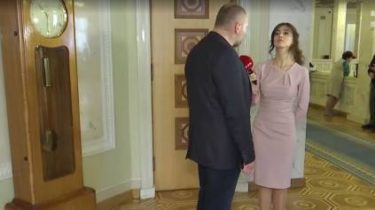 In the Verkhovna Rada in working relationships between colleagues can creep flirting. This was confirmed by elected officials who agreed to talk on such a sensitive topic, says the story TSN.19:30.

“Try it, try rubbing some of our colleagues,” suggests Sergei Rudyk. And as if to illustrate this sarcastic suggestion hopko warns: “you Can shake hands and say, sorry, we’re actually working discussion”. “I always knew how to fight back and keep themselves within the” assured Hope Savchenko.

“Flirt – it is the line that you don’t need to go”, – said Sergey Taruta. He said that when he worked in business, established for employees of clear rules concerning, in particular, clothing that would not become an occasion for temptation colleagues. But Borislav Bereza asked to do without the Puritanism. Explains the scandal in Hollywood that women themselves were to have sex with Weinstein and remained silent for many years because I wanted to make a career. Similar opinion is shared by Oksana Korchynska. “As in Ukraine are making their way to the top,” she says.

But Yuriy Birch said that the presence of beautiful and charming women inspires men to beautiful things. “Everything depends on women. Most importantly, we are not monkeying around h the Russians, where the woman is a soulless object that can be beat. We have different ideologies. The woman is a deity. And finish this” – he suggested.