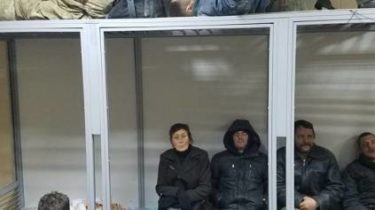 The Shevchenkovsky district court of Kiev chose a measure of restraint in the form of house arrest three suspects during clashes in Sviatoshynsky district court, which occurred on the night of October 24.

It is reported by the TV news channel “112 Ukraine”.

To the third man – Turenko A., a suspect in part 3 of article 296, part 1 of article 343 of the criminal code, is also applied house arrest.

“Tossed across the counter and grabbed”: the journalists talked about their experiences in the Svyatoshinsky court

Recall, 23 October Svyatoshinsky court of Kyiv had to choose a measure of restraint for the head of the volunteer movement, the OUN Nikolay Kohanivsky, which I suspect in shooting from a pneumatic pistol during the fight with the ex-commander of one of platoons of the “Right sector” Ruslan Camalou.

The police have opened criminal proceedings for the pogrom in the Svyatoshinsky district court. Law enforcement officers continue to document damage to property supporters Kohanivsky.