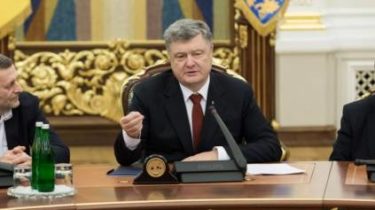 President Petro Poroshenko said that with the return to Ukraine of Akhtem chigusa, and Ilmi Umerov work for the release of Ukrainian political prisoners is not complete.

This was stated during a meeting with the prisoners held at the office of the President.

“Hard work to release Ukrainian hostages, wherever they were in occupied Crimea or in the occupied Donbas, or in the prisons of the Russian Federation, remains one of our first priorities,” said Poroshenko.

He also noted that during meetings with the leaders of the liberation of the Ukrainian prisoners is one of the first on the agenda.

The liberation of the Crimea and dreams during his imprisonment. Chiygoz and umer made the first statement in Kiev

“We are very grateful to the peoples of the world, heads of state and Ukrainian people, who put a lot of effort in today’s event finally made possible,” – said the head of state.

“We believe that Ukrainian hostages, return home. We believe and know that Ukraine will be freed from occupation. This applies both to occupied Donbas and unlawfully annexed Crimea”, – said the President.