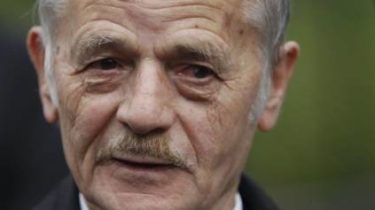 MP and one of the leaders of the Mejlis Mustafa Dzhemilev has explained why Russia released the illegally detained Akhtem chigusa and Ilmi Umerov and agreed to transmit them to Turkey.

Dzhemilev noted that the names of these two Crimean Tatars were heard from politicians all over the world and this put pressure on Russia.

According to the MP, Turkey played an important role in the liberation Chiygoza and Umerov, the head of the Russian Federation Vladimir Putin maintains relations with Turkish leader Recep Tayyip Erdogan.

“I think so, what in the world is not much left of the presidents, state leaders who shake hands with Putin. But Erdogan still supports him in some kind of relationship. To lose Erdogan Putin probably would be very expensive,” – said Dzhemilev during a briefing in Kiev airport “Borispol”.

Chiygoz: Our people felt that behind there is a power

According to him, Russia can use the liberation of the Crimean Tatars as a lever for lifting the sanctions.

“Use argument, say, in Russia I went to some kind of liberalization (…) I think if someone would fall for such a bait, it will be a big mistake. The beast remains a beast, he just goes on some tactical steps. Nothing in the policy of the Russian Federation has not changed, this predator, this invader,” – said Dzhemilev.

He noted that the international community should exert all efforts to put pressure on the Russian Federation until then, until it frees all political prisoners and withdraws from the occupied territory.

We will remind, on October 25, it was reported that Ilmi Umerov and Akhtem chigusa gave Turkey after personal negotiations between President Recep Erdogan and Russian President Vladimir Putin.