Seriously injured in the explosion in Kiev, a woman was transferred from intensive care 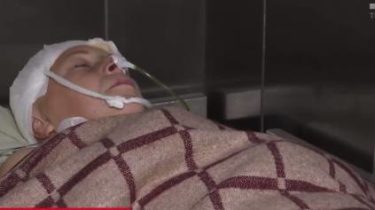 The victim of the terrorist attack in Kiev Nadezhda Tarasenko was transferred from intensive care to the ward. But doctors warn that despite the positive trend, the threat to the life of 57-year-old patient is not yet over, says the story TSN.19:30.

Hope walked the same road where the attack occurred, every night. That evening she returned home a little later because I went to buy candy for his granddaughter. Home was a few metres when he heard the explosion. A woman at home waiting for the daughter Irina and little Victoria. When I heard the explosion, the daughter gained a mother – and that she had answered the phone. “She says she passed the espresso, I thought the car exploded. It’s head was cut by shrapnel. She said she called an ambulance”, – said Irina Rybicka.

Videoproto living Hope Tarasenko injured in the attack, was not

In the carriage of an emergency at first glance, the doctors seemed to have Hope minor injuries, but on the way to the hospital she began to swell and the person to deteriorate it. Later it turned out that one of the iron balls, which was Packed with explosives, hit the head, broke the bone and lodged in his brain. At the hospital, Hope was immediately taken to the operating room. Only now the woman decided to release from intensive care, but still remains the risk of viral lesions. However, even with positive developments, the trauma will still affect the future life of the victim. “Of course it’s a brain injury. Starting from a minimum of headaches, seizures, and so on,” explained neurosurgeon Ruslan Sklar.

The cordon around the hospital and a metal ball in the brain: the status of victims in the Kiev attack heavy

How long will treatment and rehabilitation, doctors can not say. Over the two days which we Hope Tarasenko spent in intensive care, relatives have spent 15 thousand hryvnias – it was all their savings. What’s next, daughter Irina does not know, the family is still in shock, because every day, families walk the same road. And Irina is walking with Victoria not far from the place where the bomb exploded.