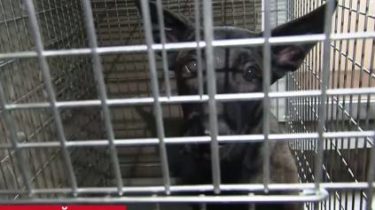 In the capital, a largedog attacked a 2-year-old child, to save who threw a baby sitter and passers-by. But the owner of the animal was near, to drive away, however your dog in no hurry, says the story TSN.19:30.

On the waterfront during the usual walk on boy suddenly rushed the shepherd. According to the babysitter, the dog’s owner just watched what was going on. “Multiple abrasions of both lower extremities, provided recommendation on further action with the child regarding tetanus and rabies,” – commented on the condition of the victim of Darius the doctor Sergey Lifanov. Suffered and the child’s Tatiana Calic – on foot at the woman cuts from the teeth and a huge bruise.

To ward off the dog helped fishermen in front of which it happened. “Rescued the dog and then I politely talked with the owner. He kept the dog, but the dog is aggressive, she barely reacted to his team. He didn’t understand what happened” – says one of the rescuers Andrew Times. 20-year-old owner of the animal the fault in happened does not see. “He was playing. If it was aggression, then there really would be damage. Showed me baby – there is not to blood wounds”, – says Dmitry Krasovsky.

The boy’s parents have a different opinion, and has written a statement to the police. “There are certain rules that the dog must be on a leash, muzzled. I want the guy incurred the liability is a financial compensation should be, I don’t know. Let this amount to the orphanage will go,” – said the mother of Darius to Alexander Zvarych.

The patrol police made the administrative Protocol on the owner of the dog. Because his dog attacked a child, the man faces a penalty of 51 UAH. However, the mother of Darius believes that this is not enough, so will write a further statement to the police and then the Prosecutor to seek the maximum punishment for the abuser of their child.

As reported in the same month, in the village of Holoby, Volyn region, dog of a priest of the Moscow Patriarchate of Niphon attacked 3-year-old – kid with numerous bites hospitalized in the Kovel district hospital.