People Semenchenko came out with pickets under factory Poroshenko 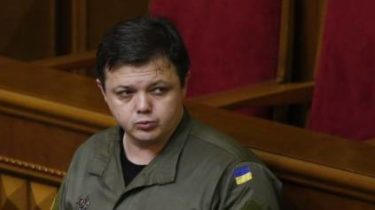 Representatives of the “liberation Movement” announced the decision to block the business, which belongs to Petro Poroshenko.

It is, in particular, about the plant of the Corporation Roshen in Vinnytsia and logistics centre in Yahotyn, Kyiv region, said MP from “Samopomich” semen Semenchenko.

The nationalists “took control of the” helipad of Yanukovych

What form of protest was chosen, the politician did not elaborate. “The idea is that Poroshenko, as the President has to do to choose – it is enriched during the war, which continues with Russia, or engaged in the country, part-time it does not work”, – said the MP.

Semenchenko also noted that it is not only about Roshen, “but all business: transport, agricultural, insurance and media.” The steps in the “liberation Movement” explain the desire to force the President “to act in the interests of the whole society, not just themselves personally,” and that “the President is enriched with thieves and murderers”.

We will remind, ex-President of Georgia, the party leader “Movement new forces,” Mikheil Saakashvili received the documents from the office of the President on deprivation of his citizenship and plans to appeal it in court. In Georgia the politician is charged with four criminal counts. He faces up to 11 years of imprisonment. Saakashvili has filed a petition to grant him political asylum in Ukraine.