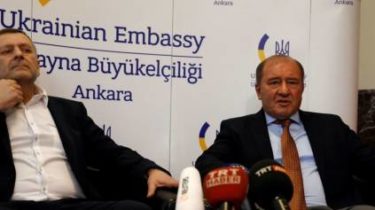 The liberated prisoners of the Kremlin Ahtem Chiygoz and Ilmi Umerov met with the special representative of the state Department on Ukraine with Kurt Volker. This was announced by Crimean Tatar leader Refat Chubarov says the story TSN.19:30.

The head of the Majlis did not disclose the content of the conversation, and confined himself to the remark that it was informative and open. And Walker, and Chiygoz and Umarovi arrived in Kiev on the eve: the American arrived from Berlin, where they discussed with the Minister of foreign Affairs Klimkin introduction in Ukraine of international peacekeepers, and Crimeans – from Ankara, where they were taken immediately after his release from a Russian prison.

Poroshenko awarded Chiygoza Umerov and the order “For merits”

Chiygoza, whose occupants had been sentenced to eight years in prison, and Umerov, who was jailed for two years, unexpectedly for the General public and themselves prisoners freed on October 25. As it turned out, the freedom of the leaders of the Crimean Tatars became possible in the result of considerable efforts of the Ukrainian government and the personal intervention of the Turkish President Erdogan.