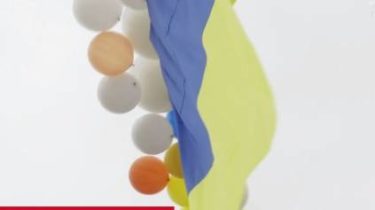 The Ukrainian flag was raised over the occupied Donbass. In front of the town launched into the sky a huge blue and yellow flag and with the help of gel balls sent him in the direction of Gorlovka, according to a story TSN.19:30.

The action inflating balls and deployment of the flag together, the locals and the military, but the protagonists were immigrants from ORDO. Balls gave the children of Kramatorsk, and the flag made by a woman from Donetsk for the money that gathered at a Patriotic rally in the occupied regional center – so the flag was entirely made by the efforts of patriots who live on the temporarily uncontrolled territory. The organizers of the event say that actually the patriots in the Donbas a lot. “A lot just there to say dangerous,” they admit.

Their real political views, few voiced out loud – people figures of each other with barely recognisable features and almost intuitive. “We are looking for color. There is a love of flowers is felt most acutely,” – say those who are forced to hide the face of fear of terrorists. It is to support those who are waiting for Ukraine, and launch a huge flag with a length of 20 and 6 meters wide. Such action is already the second – first time initiative, greatly alarmed the enemy. “He’s very successfully went to the airport, then on the Yasynuvata interchange. The guys at Twitter wrote – over my head Zakharchenko swept. And shot him, and that only did not do – well pulled a face” – says one of the soldiers of the regiment of special purpose “Kyiv”.

The flag of Ukraine and militants for several hundred meters. Like the military fighting for the Donetsk airport

The repetition of the action, the reaction of the militants is also not long in coming: the shooting started. To the accompaniment of sounds of war violinist Marina Bands played the Anthem of Ukraine, which wants to repeat the already in Donetsk after its liberation from the invader. She sang the words of the national Anthem Christina Panasyuk. Meanwhile, the flag successfully reached Gorlovka and amuse the eyes of local patriots.