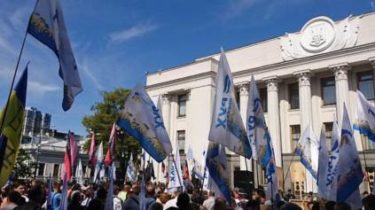 Now near the Verkhovna Rada building, where there is a tent town of protesters, gathered the greatest in the last week the number of people – about 400 people, says the Ministry of internal Affairs.

During the rally, the leader of the “Movement of new forces,” Mikheil Saakashvili said, giving the authorities a final chance to accept the terms of the protesters.

“We can’t just stand here forever. We should be 100 times bigger and we have to find other peaceful forms, not just live with them under the Windows,” he added.

The office noted the increased security measures. Now follow the order of about 700 police officers and National guard troops.

“Law enforcement officers hope that the organizers and the participants will adhere to generally accepted rules of conduct and not to violate the law. Police, in turn, will do everything to prevent possible provocations and to stop offenses”, – assured the interior Ministry.

We will remind, on October 17 at the Verkhovna Rada began to protest, whose participants demanded to cancel parliamentary immunity, to amend the electoral law to create an anti-corruption court, as well as to adopt a law on impeachment of the President. Activists established a tent city and periodically organize clashes between police.

Videoquality refused to work with documents, the adoption of which was demanded by the protesters