The historic elections of communities in Ukraine. Leaders manipulate the voting results 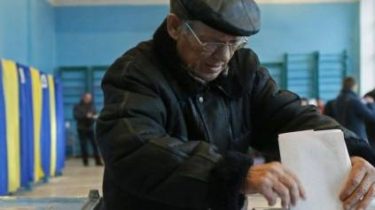 Voices in the plots were counted and transferred to the Central election Commission. Political parties also received data of counting of votes. But now, the main competitors of “Block of Petro Poroshenko “Solidarity” and “Fatherland” Yulia Tymoshenko – the voices are different data.

As reported in BPP, they got a clear victory in the elections. According to some data, won 111 candidates from BPP or more than 55% of the total number of elected heads. Of them, in particular – 16 city of OTO, 30 62 township and village heads. What the BPP believes as nominated by the party heads, and independents supported by the party.

Counting the number of victories of the members still continues.

In a statement on the website of the PPB notes that “no other political force comes close to this result.” “Candidates from the “Batkivshchyna” according to preliminary data lead to 10 GRT, “Agrarian party” – 5 GRT, the party “Our land” – 5 GRT, “For specific cases” – 3 OTO, “DILL”, “Radical party” and “Power of people” – 1 OTO,” reads a press release of the BPP.

In turn, the “Fatherland” some other data. The statement of the party Tymoshenko said that the victory on elections of heads of General relativity won 14 candidates from “Batkivshchyna” and 11 independents that came with the support of the party. Thus, according to estimates of the “Fatherland” in General the party has 25 wins and not 10, as stated in the BPP. Likely that BPP publishing results, not included in the victory of the “Batkivshchyna” 11 independents supported by the party.

It is also noted that the party of the “Batkivshchyna” has nominated its candidates in 200 of the United territorial communities. In addition, 3 698 candidates for city, village and settlement councils, 56 candidates for the position of the heads 13 urban, 43 rural and small-town General relativity.

Recall that in General, Ukrainians chose 4 506 thousand of deputies of the unified territorial communities.