The rebels were beaten on the positions of Ukrainian troops and residential areas of a Water. Chronicle of the ATO 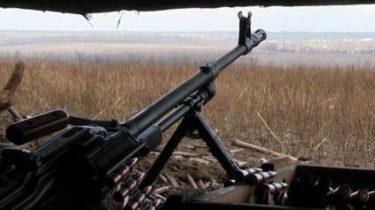 Monday, October 30, in the area of ATO in the Donbas the militants four times fired from the infantry weapons of the positions of the Ukrainian military. In the fighting and no casualties.

About it noted in the press center of staff ATO.

“So, the mercenaries a few hours to beat from grenade launchers and heavy machine guns on the outskirts of Avdeyevka and the Trinity, in the Donetsk direction. The same gun in the seaside area of the Russian occupation groups fired in the area of Marinka and Water. And around 13:00, once again demonstrating a disregard for the safety of the civilian population and in defiance of the peace agreement and international humanitarian law, the enemy fired several 120-mm mortar residential neighborhoods of the village of Vodiane, where there are no positions of forces ATO”, – stated in the message.

We will remind, yesterday in the Donbass in the shelling of the militants was wounded one Ukrainian soldier.