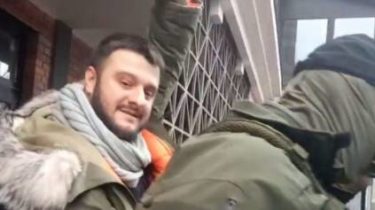 On YouTube posted a video of the arrest NAB the son of the Minister of internal Affairs of Ukraine Arsen Avakov , Alexander.

The record shows, as Avakov, Jr., are in the departmental car under the supervision of armed employees of the Bureau in the form. The vehicle pulls away from a building.

Journalist Natalya Sedletskaya previously reported that Alexander Avakov brought to the National anticorruption Bureau of Ukraine. He needs to read the message on suspicion, and subsequently to deliver to the court for election of a measure of restraint.

We will remind, on October 31 NABOO staged searches at the office of the son of the interior Minister Arsen Avakov Alexander. The Bureau emphasized that the actions are within the business to ensure MIA backpacks.