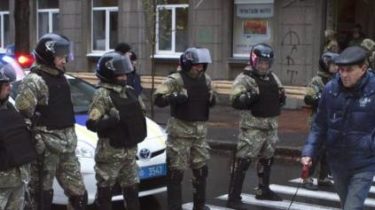 What the NAB arrested the son of the Minister of internal Affairs Arsen Avakov Alexander in a corruption case, in the “popular front” believe the political pressure on the Minister, the National police as a whole, this political party and its parliamentary faction.

“Today’s political show with the arrest of the son of the Minister of internal Affairs of Ukraine Arsen Avakov and the other two individuals has nothing to do with the fight against corruption, neither with the right. It was collecting dust two-and-a-half years on the shelves of NABU and SAP. According to the official report of the Ministry of interior, was held dozens of expertise and hundreds of procedural acts, which, according to the interior Ministry, there is no crime and it is proven in court”, – emphasized in the popular front.

The party believes that the current detention of the son Minister want to use to political pressure.

“But now we are on the other. Why just after the Ministry of interior and personally Minister Avakov did not allow the violent dispersal of the tent camp at BP, took a separate and independent position among other law enforcement agencies, comply with the constitutional function of the verification of the grounds of granting of citizenship, including the so-called protesters, and is one of the key balances in the system of law enforcement in the country and a model in reforming the National police, which has the highest level of trust of citizens of Ukraine, member of his family are outdated and politically motivated charges? We view this action as political pressure. It all goes down in a series already dozens of baseless charges solely against one party and its members”, – declare in “the popular front”.

“Popular front” addressed to the heads of anti-corruption authorities and ambassadors of the countries “the Big seven”:

“We appeal personally to the Deputy Prosecutor General, the head of the Special anti-corruption prosecutors Nazar Golodnitsky, Director of the NAB Artem Sytnik, the ambassadors of the countries “Big seven”, with whom we co-created these anti-corruption bodies, once and for all put an end to the politically motivated activities of anticorruption bodies. If there is a crime – go to court and prove it. If there is a political motivation – quit my job and become members of political parties, which is happening now”.