Avakov Jr. said, what did father Minister to the news about the Syrian son 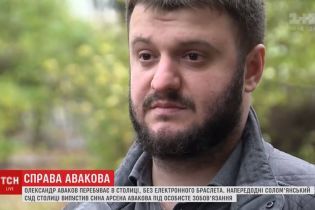 The son of interior Minister Alexander Avakov, after imposed by the court a preventive measure, remains in Kiev and without an electronic bracelet. TSN was able to talk with him. In particular, Alexander said, why no tracking device.

“I was told that there is no opportunity to put on my bracelet,” – said Avakov Jr.

In Kharkov, the son of the Minister of internal Affairs did not go, because he believes that to be in Kiev at the moment the.

“Of course, I prefer to be in Kiev, because is working with attorneys, investigators,” – said the official’s son.

Videoaaron Jr. said about the political subtext in the “backpacks”

Today again he says – everything that happened these two days, has only political connotation. He says the case for several years, but communication with investigators NABOO began just this Tuesday, at 7 am. Father is a Minister, says Avakov Jr., did not intervene.

“I called him (father Arsen Avakov – ed.ed.) say – came to me with a search warrant, I’ve already called the lawyers. Says – okay, you do that,” commented Alexander.

The decision of the court, said, at the moment can only perform partially. Because a judge ordered him to pass three passports to the immigration service. But Avakov Jr. says, has only two passports, but they still have employees anti-corruption Bureau.

From custody nand will Avakov Jr. went out the night before. Until then, the Solomensky court of Kiev 4 hours was literally occupied by journalists, people in camouflage uniforms and MPs. The latter saying came not to exert pressure on the court, and to monitor the work of prosecutors.

Alexander Avakov, the prosecution was accused of facilitating the embezzlement of public funds. Like, two years ago, he and the then Deputy Minister of internal Affairs Sergey Chebotar has helped the company involving a third detainee Volodymyr Lytvyn, to win a tender for the purchase of backpacks for the internal troops at inflated prices. Requested the detention or bail of several million hryvnia.

“It has a wide acquaintance with people’s deputies. The authority believes that may take place or at his request, or his opinion effect,” he argued, prosecutors in court.

The other two meetings continued on the floor below and calmer. Two more defendants in the case about backpacks – Sergey Chebotar and Volodymyr Lytvyn – judges released under the personal obligation.