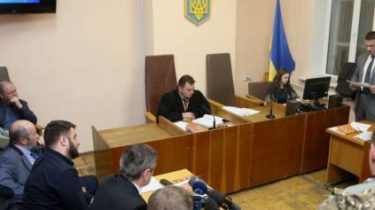 Solomensky district court of Kyiv has released a third defendant in the case on purchase of backpacks Volodymyr Lytvyn under the personal obligation.

“The court has satisfied the petition of SAP about the arrest of Litvin and released him on personal recognizance. He must wear an electronic bracelet”, – stated in the message.

Previously , the court chose the same preventive measure son Alexander Avakov, who is also a suspect in the “case of the backpacks”.

Videocast lawyers and a loud statement: the court shall elect a measure of restraint for defendants in the “case of the backpacks”

Monday evening, 31 October, NAB announced suspicions Avakov Jr. and former Deputy Minister of internal Affairs Sergey Chebotar. They are suspected in embezzlement of 14 million UAH. The third defendant is the head of the it company Turboseo Volodymyr Lytvyn from Kharkov.