In the Donbass killed Ukrainian soldier, two more wounded. Chronicle of the ATO 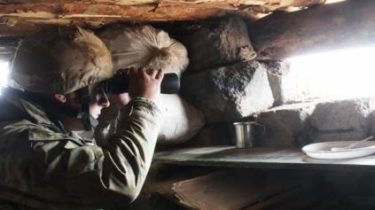 In the area of ATO in the Donbas for Wednesday, November 1, the fighters of 17 times fired at positions of the Ukrainian military. One soldier killed, one was wounded and another received a combat trauma.

“The armed forces of Ukraine 13 times with return fire firmly suppressed the activity of the enemy, – said the press center of staff ATO.

Of the deceased it is known that it occurred around 11:30. During a combat mission in the area of Marinka in the Donetsk region on a mine exploded and killed major of the National guard Sergey Sirotenko. Another soldier-a soldier was injured by shrapnel. Sergey Sirotenko mobilized in February 2015. C June 2016 – in the military service under the contract. The deceased left a wife and two children.

“In the second half of the day slightly increased the activity of the enemy in the direction of Lugansk. So, in the evening militants four times hit our positions near krymske, using the full range of infantry weapons and mortars caliber 82 millimeter. Fighters ATO symmetrically meet the enemy. The result of this confrontation, about 23:00 received a combat trauma one Ukrainian defender. In addition, after 18:00 invaders has released eight minutes of caliber of 120 millimeters on the outskirts of Троицкоve”, – noted in the press center.

On the Mariupol direction night fighters almost an hour fired from anti-tank grenade launchers and small arms on the strong points of the Ukrainian army near Starognatovki.

In Donetsk direction of the “hot spot” in the future remains Avdiivka industrial area. There night fighters several hours beat from various types of launchers. Under fire from the same weapons at the end of the day hit positions of the Ukrainian army near Lugansk and Maori.

Facebook press-center of staff ATO
,
The national guard of Ukraine