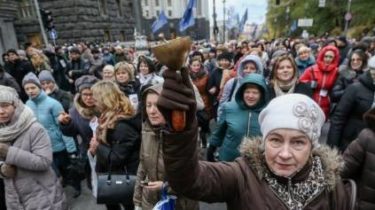 The Ministry of education and science we hope that early next year the salaries of Ukrainian teachers will increase in one tariff category, fixed allowance of 20% for the kudos for all the teachers, and the best will be 30%.

The corresponding figures laid down in the government bill “On state budget of Ukraine to 2018”, which the Verkhovna Rada for a month and a half still couldn’t see.

“If now the amount of the allowance for prestige – decision of local authorities, from 2018 we make it mandatory. It is obvious that the money provided under the educational subsidy that we give to teachers ‘ salaries from the state budget. The best teachers – for example, those that get the first class in the reform of the “New Ukrainian school”, teachers in inclusive classes and the other should get a raise at 30%”, – said the Minister of education and science, Liliya Hrynevych, during a meeting with heads of regional departments of education.

The education Ministry has assured that money from educational grants to increase salaries enough. With the subsidy this year will not have time to use 6 billion UAH. So next year they will be sent to the logistics and other needs of education.

Should also include funding for the following year to the division of classes into groups for learning foreign languages, labor studies.

Recall that in 2017, the year the salaries of teachers have increased in half – thanks to the promotion of teachers ‘ pay-up grid tariff two tariff category.

Earlier it was reported that for the modernization of the primary school will allocate one billion hryvnia and begin to build new kindergartens.