Saakashvili is appealing the refusal of the Migration service refugee status 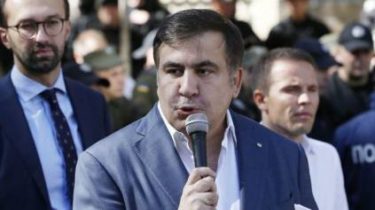 Protecting the leader of the party “Movement new forces,” Mikheil Saakashvili appealed to court against the decision of the migration service in Kyiv oblast of the “failure in processing documents for solving the issue of recognition of the face that needs extra protection.”

“This decision of the migration service is unreasonable and unlawful, and therefore violates the rights of Saakashvili to receive in Ukraine added protection against possible illegal extradition to Georgia for false accusations, which are not recognized by any country in the world, including Ukraine”, – he said.

Today, defenders of Saakashvili filed a lawsuit to the administrative court.

Protection Mikheil Saakashvili challenged in court the yesterday’s decision of the LCA in the Kyiv region “refusal N.Saakashvili wit…

We will remind, Saakashvili again refused refugee status in Ukraine. 31 Oct Saakashvili personally filed a petition for asylum to the migration service. He had a long conversation with Ministry officials, during which justify the risks to his persecution in the country of origin of Georgia, for fear the application to him of the criminal prosecution.

Ruslan Chernolutsky noted that Saakashvili referred to the resolution of the parliamentary Assembly of the Council of Europe 2015, which is celebrated on the prosecution of Saakashvili’s team for political reasons. He also referred to the Report of the US State Department for 2015 about human rights violations in Georgia on the basis of political motives.

After receiving the second refusal of the migration service, Saakashvili decided to appeal the decision in court.