Victims of articled under the Kalinovka compensated for only one house 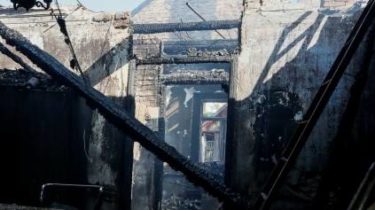 More than a month has passed after the explosions at ardclach near Kalinovka in Vinnytsia region, however, still result from allocated for the elimination of the problems of 100 million dollars is not very noticeable. From explosions under the Kalinovka suffered almost fifteen hundred houses, and spent the repair money reimbursed while only 28 families, according to a story TSN.19:30.

With the purchase of a new home to replace the completely destroyed it is even worse – bought one house. The lucky winner was Nina Kovalchuk, from the ruins of a farmstead which TSN has arranged visiting the Studio for broadcasts of large-scale fire in military warehouses. A new house purchased for 30 thousand dollars by the state, now comes the paperwork.

To boast like other victims of exploding shells can’t, someone didn’t wait for penny and restores housing on their own or with the help of volunteers. “I helped, and no one else helped. So sad, I worked all my life,” – says the old resident Medvedki Praskovya Parfeniuk. “The slate we bought for your money – for 140 UAH. Have already spent ten, cheques handed over to us the money is never returned. Ordered Windows, so I don’t have more of that,” admits the resident of the village of Pavlivka Love Grinenko.

Chairman Kalinowski RGA Vladimir Havryliuk says that the promised Cabinet funds have already been transferred to the account of the district, however, quickly distribute them impossible because of the complexity of the procedure. “The state system is difficult. Lying there in the basket, how much taken, how much was used, what was used – there is a specific order we should follow,” he explained.