Bloody accident on the “Heroes of Dnepr”: all the drivers have voiced their own versions 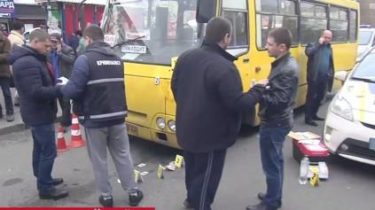 In Kiev the bus ran into peoplewho came from the trolley on the outskirts of the city near the market “Heroes of Dnepr”. Drivers of minibuses, trolley-bus and the passengers have put forward several versions of the tragedy, says the story TSN.19:30.

We now know that the trolley stopped at the second lane, the passengers came out and passed through parked in the front row of the bus, when suddenly appeared between the two “Bogdani” like in a vise. As a result, the 64-year-old woman died on the spot, her senior year, the man died on the way to the hospital. One of the affected doctors was taken to the hospital emergency room. “A thorax bruise,” explained senior Lieutenant of police Alexander Marchenko.

According to the head of route 402, it was so: his bus was at a stop, the second lane drove the bus to drop off passengers. As soon as people came out – they ran another “Bogdan” – 464 route. People have become a layer between the two buses. “Standing “Bogdan” landings, felt a jolt in the car. He came out, looked like a minor accident. Therefore, the driver says, well, what is it? That’s all right. He turned around, closed the door and left,” says Peter Pavlenko.

Death of spouses and the eyewitnesses: the Metropolitan police revealed details of the accident with the bus

This version adhere to some witnesses of the accident, which adds that the driver “Bogdana” drove up to the stop at high speed. “The trolley stops, people come out – and this is flying and everything,” – says an eyewitness. Place trolley stop standing up depot managers, who argue that the first band stood minibuses and passenger cars, and in this case, the electric vehicle can drop off passengers further away from the curb. “He was not able to come to a stop. The bus crawled under the bus and something happened, what happened”, – says head of traffic safety Kurenivsko trolleybus depot Oleksandr Burlaka.

TSN found the taxi driver, who still complain. He explained that he was standing at the bus stop before the trolley pulled up. The mini bus also came passengers. “Stood in front of the bus. I began, waiting until he pulls away. It seems to me that he passed the back door. I dropped people, and stood. To move forward I could not” – says the driver Sergey Shevelev. His version of events is this: once people came out of the cabin, and on the second page already stopped the bus, the driver of the other bus began to back up. Sound any alarm Sergey allegedly did not. Next, the driver ran outside and began to help people, and the driver, who slid back, went away. “It then found it already. And then he even came to see what was going on behind him, I don’t know,” – said Shevelev.

The driver who fled the scene and did find the other end of the district, after which all drivers sent for examination for intoxication. Lawyers say that to the trolleybus driver issues is less likely, because his stopping place was occupied by minibuses and cars. “The investigation is to establish who all the same of the two shuttles was moving – the one that sunk, or the one that approached. Real imprisonment is the period of 10 years”, – said the lawyer Yaroslav Kuts.