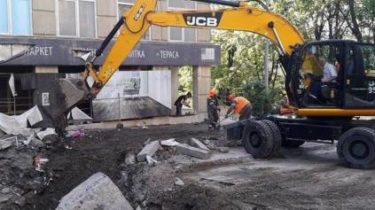 This year the capital has recorded a 10 thousand damage heating systems. Every day happens up to fifty new breakthroughs in the heating season leave the whole house without heat and hot water, according to a story TSN.19:30.

The city administration and “Kyivenergo” regularly report on volumes of the executed repair work, however, to solve the problem fundamentally can not yet. The houses on the hem of heating is not even included – at first attributed this problem to the boiler, and then breaking the tube, then the electricians said that during the heating the wire broke and fled. This situation is not unique, and in some places the explanation of the communal people perceive as excuses.

Implications for the restoration of only a single accident to spend at least 10 thousand hryvnia. Since the beginning of the heating season in the capital, there were 800 accidents. “Growing by 14% a deterioration. Now 70% worn out thermal networks” – explains the chief engineer Anatoly Vasiliev. In KSCA explain that to upgrade the infrastructure of only one of the thermal block should be more than 600 million dollars – is enormous for the city means which in the budget just yet. Therefore, the government operates the old method of election of the sharp objects and working at least for them.

The fog from the sewers: in Kiev at the Lobanovsky Avenue burst pipe

Emergency crews in most cases only applied the patch on the pipe, and the repair lasts no longer than one season. Many residents complain that the pits in their yards appear regularly – every year or even more often. Without heating are still living two hundred of the capital’s homes, and on the hot water pipes stretches back to September. Experts in one voice warning that the wait for significant improvement of the situation.