Death of spouses and the eyewitnesses: the Metropolitan police revealed details of the accident with the bus 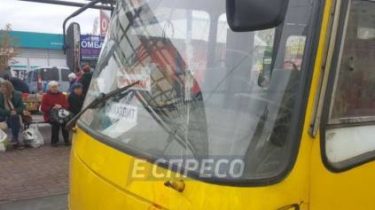 As a result of collision of a minibus in Obolon district in Kiev were killed by spouses, the locals 1952 and 1953 year of birth.

About it reports a press-service of the Kiev police.

It is noted that the woman from traumatized died on the spot, and the man in the carriage on the way to the hospital.

At the scene worked as a patrol police. For establishment of all circumstances of road accident on a place of incident worked the specialized group of the investigative Department.

Police talked to witnesses and eyewitnesses of an accident. According to them, the man and the woman were at a stop of public transport. When the trolley stopped in the second lane, they went out into the roadway behind the bus, parked at the bus stop, and fell under the wheels of the other, which came to a stop.

As a result of collision of a minibus in Kiev killed the wife (UPGRADED) the Woman from the received traumas has died on the spot, and the man – …

The driver of a trolley bus and two taxis will be delivered to the psychiatrist for tests to find out whether they were in a state of intoxication, and then to the investigation Department for questioning and establishing the circumstances of the deadly crash.

The event is registered in the unified accounting statements and reports. The issue of opening of criminal proceedings under article 286 (Violation of traffic safety) the Criminal code of Ukraine.

Earlier it was reported that the capital on the street of Academician Zabolotnogo there was a fatal accident. Cars flew in and parked at the curb a truck, causing the driver of the car died.