The militants staged a “hell” in Mariupol direction, and quieted down near Donetsk – ATO digest 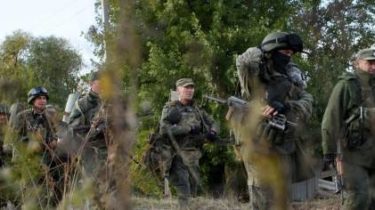 Saturday, November 4, the militants of illegal armed groups 11 times violated the ceasefire in the zone of the antiterrorist operation. Ukrainian military returned fire nine times, forcing the separatists to the world. Losses among the ATO forces there.

Videonote on the front: the militants fired at the positions of the grenade along the entire front line

Hot on the Mariupol direction. At midnight, the Pro-Russian mercenaries four times fired rocket-propelled grenades and heavy machine guns strongholds of the Armed forces of Ukraine near the Water. The same gun fighters beat on the fortifications of the ATO forces on the approaches to Krasnogorovka.

At the direction of Lugansk separatists with small arms have made provocations near the Crimean and Luhansk.

The militants attempted breakthrough near the Crimean in the Luhansk region

The decrease in the activity of fighters was observed on Donetsk the direction. Only in the morning they fired antitank grenade launcher and small arms of the defenders of the Town.

We will remind, the Chairman of the Donetsk regional military-civil administration Pavlo zhebrivskyi said that in the area ATO killed nearly three times times more fighters than the Ukrainian military. According to Zhebrivsky, information is obtained from different sources and through different methods.