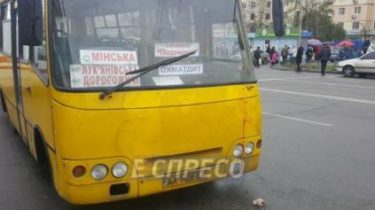 Died in an accident with a bus in Kiev was Colonel and former assistant to the rector of the National Academy of security Service of Ukraine Valery Kornienko and his wife.

“Academy cadets affectionately called him “Corinne” and tried not to catch his eye. He led the drill part and “would give me hard time” subordinates as Sidorov goats. Thanks to his cobracam was still holding the pile,” wrote Zolotukhin.

He also added that the deceased was one of the most responsible and professional Ukrainian officers, whom he knew.

We will remind, in Kiev on the street Heroes of Dnepr near public transport accident involving a minibus №464. The stop came the bus, which stopped in the second row for the disembarkation of passengers, it has already started to go, when at that moment the bus went to the first row and hit two people.