In Kiev, a car crashed into a pole at the bus stop and broke 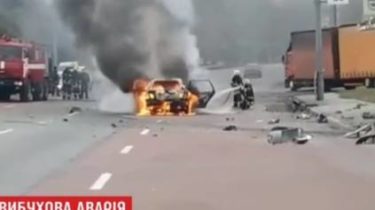 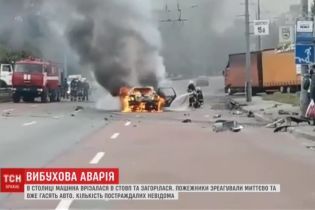 In Kiev on the street Academician Zabolotny middle of the road broke out of the car, according to a story TSN.12:00.

The fire paralyzed the whole street, two rescue vehicles were trying to extinguish the car, but it burned to the ground.

As it became known, the explosion occurred due to an accident, although at first suspected another terrorist attack. The car crashed into a pole near the stop from a powerful shot came off the wheel, and the parts scattered around the bus stop. Itself cars tossed aside, and started a fire.

Videovigilancia car and suspicion of the attack. In the capital, a fire paralyzed the street Zabolotnogo

The accident, fortunately, no casualties, eyewitnesses of the accident assisted the driver, who was injured hands.

We will remind, in Kiev on the street Heroes of Dnepr near public transport accident involving a minibus №464. The stop came the bus, which stopped in the second row for the disembarkation of passengers, it has already started to go, when at that moment the bus went to the first row and hit two people to death.