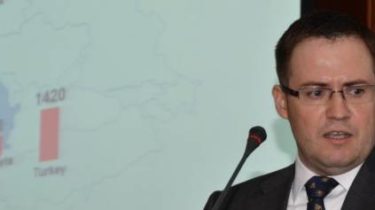 “Naftogaz of Ukraine” began checking the information against a member of the Board of “Ukrtransgaz” Sergey Alekseenko. He is suspected of involvement in the offshore and tax loopholes.

“Service compliance “Naftogaz of Ukraine” began checking the information that appeared in the media about the opening of the company and possible carrying out operations in a foreign jurisdiction, a member of the Board of PJSC “Ukrtransgaz” Sergey Alekseenko, former chief adviser to the Chairman of the Board of “Naftogaz”. The company will unveil the results of the audit after its completion”, – stated in the message.

We will remind, in a public global journalistic investigation Paradise Papers (“Documents Paradise Islands”) argued that the Ukrainian gas top Manager Sergey Alekseenko was founded by an offshore company on the Isle of man, which is used to withdraw currency abroad contrary to the monetary restriction, which operated in Ukraine. About it reports “Gromadske”.

Pioneer Foundation was founded in early 2016 and lasted 14 months.

According to the journalists, to the scheme of withdrawal of currency could be involved in the Russian “Alfa-Bank” and account for the Fund Alekseenko decided to open the “Bank of Cyprus”.

Sergei Alekseyenko in July 2014 started to work at “Naftogaz of Ukraine” and became the representative for future projects. Now he is a member of the Board of subsidiary company “Naftogaz of Ukraine” “Ukrtransgaz”, which is responsible for the transmission and storage of natural gas. To work in the state Alekseenko was an investment banker.

Details about Paradise Papers read on Dnia this link.