Saved a few meters: the military in a few seconds missed him with death during a fire in the Sand 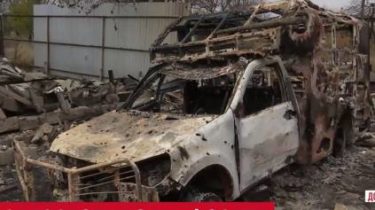 On the frontline along the Donetsk airport in recent days there has been a serious aggravation. For the first time in a month the enemy used reactive multiple rocket launchers, according to a story TSN.19:30.

Came under fire and suffering Sands, and the beat from Donetsk are not on the fortifications of the APU, and the residential sector. Getting a powerful projectile completely destroyed the garage near one of the houses and burned the car. One of the soldiers wanted to hide in the garage from the fire, because it was on the street, and the shells fell all of a heap. However, to the garage he got a few meters, stopped around the corner – and it saved his life. “An explosion, a bright flash, tossed it aside,” said the fighter nicknamed “Circassian”.

Videoseries aggravation: the military reported about the massive fire in the Sand

Military consequences of the explosion determines that flew no less than 120-gauge, and “Circassian” born in a shirt – death missed him on a matter of moments. To extinguish and rescue the place was just nothing. “It’s the second burned down. Here was not so much to extinguish. Explosive, or what,” says the fighter with the Callsign “alpha”. The doctors rejoice that such a powerful attack didn’t added them. “No casualties, no wounded,” – said the chief medical officer Vasily Percent.

After hitting “Hail” fighters had reduced the intensity of the attacks. Chronicle of the ATO

The shelling lasted the Sand on the eve of 30 minutes, during this time, the enemy has released two dozen heavy shells. Fighter Atlas has determined in fragments: bill cannon artillery and self-propelled guns. “Self-propelled artillery “Carnation” caliber 152. In the direction of Donetsk”, – he explained. According to him, in lozivs’kyi forest worked from two batteries of Russian self-propelled units. The military said that so openly and aggressively the enemy is not provoked for a long time, however, the army of the proportional response of the resist. But the worked point – and occupiers missed their ammunition. Of their breaks on the side of the insurgents there is a loss.