In Kiev illegally running nearly half of minibuses – KSCA 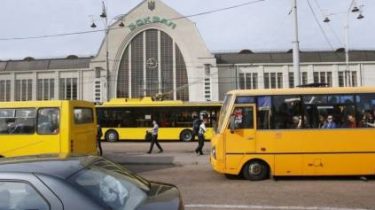 Kyiv city state administration noted the illegality of the work 40% of the taxis in the capital.

This is stated in the audit results of the efficiency evaluation of functioning in the Department of transport infrastructure of the internal control system of the process of Carrying out competition on transportation of passengers on bus routes of General use”, transfer Ukrainian news.

It is noted that during the audit revealed a number of significant drawbacks for the organization and control of the Department of transport infrastructure and inefficient work on the part of Municipal transportation service.

In the Lviv region had not missed the truck and bus: injured 12 people

In particular, it is specified that as of mid-November there are no legal grounds for service carriers in the taxi 40% of the routes (67 of 166 that exist).

It is noted that in some cases, the validity of the contracts is over 6-9 years ago.

During the audit identified that the Department does not validate carriers provide information on the presence of employees who carry out daily monitoring of the technical condition of vehicles and conducting daily inspection of the condition of the driver and quality of buses.

We will remind, on Saturday, November 4, in Kiev on the street Heroes of Dnepr near public transport accident involving a minibus №464. The stop came the bus, which stopped in the second row for the disembarkation of passengers, it has already started to go, when at that moment the bus went to the first row and hit two people to death.

Died in an accident with a bus in Kiev was Colonel and former assistant to the rector of the National Academy of security Service of Ukraine Valery Kornienko and his wife. The bus driver, who allegedly did the hitting, informed TSN announced its version of, say, pedestrians crushed by a bus that was in front of him and suddenly pulled back. Subsequently, the mayor of Kiev Vitali Klitschko instructed to check the carrier’s capital for the deaths of two pedestrians after hitting the bus.