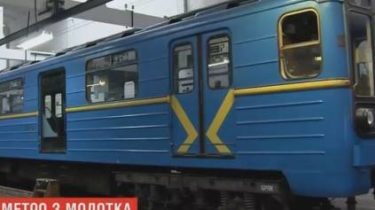 First time in the history of the Moscow metro, the cars that are out of order, put up for electronic auction, said TSN.12.00.

The sale will take place in 10 days. The starting price of nearly half a million hryvnia. Under the hammer will take cars which have served for more than two decades. Now they wrote “marriage” and put on sale on the website Transparently. In the metro I believe – for used cars will turn.

“Look forward to a creative cluster. Here you can make coworking “do Not lean” for introverts. You can feel the driver to announce the stops that you will like. Even a subway to troieschyna. Of technical specifications – not broken, not painted, “EuroBLECH” no, my dear,” – said the employee of metro.

Earlier in the subway cars, or cheated, or upgraded. Three years ago, some reconstructed by the Japanese. They undertook to modernize only very old composition, because they have a cabin of thick metal. Later, more skinny, more period to ride passengers is dangerous.

On the sale of decommissioned cars metro information posted in a social network. There actively began to wonder what to do with them next. Among the most common ideas: wagon cafe “Last chip”, photo Studio “don’t lean on the” hostel “do Not linger at the door” massage parlor “rush Hour”.

The car with driver’s cab assessed somewhat cheaper than an ordinary passenger car. However, separately it is impossible to buy. Sold only in pairs.

The starting price for two cars – 483 165 thousand hryvnias 60 kopeks. In the metro said that used cars are interested in more and the Germans. However, if at the first auction no one will buy them, try to sell a second time. After – the way to scrap.