In Russia, the journalist was called to fight “oplotovets” who beat his colleague from NTV in live, and lost 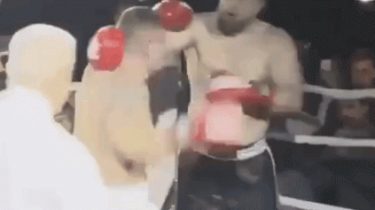 A journalist from the Russian city of Perm Roman Cetin called for a Boxing match Muscovite Alexander Orlov, who hit the journalist of NTV during the live broadcast from the celebration of day of airborne troops.

Cetin challenged Orlov via social networks and received a consent to the match. However, the fight had to be postponed twice: the first time due to the fact that the eagles have violated the anti-alcohol coding, the second time, at the request of the journalist.

In the end the battle took place on 10 November in the format of a Boxing match. Russian media conducted an online broadcast of the game live. After four rounds the judges gave the victory to the eagles. It turns out that rowdy has twice beat journalists live.

We will remind, in Moscow on 2 August, during direct inclusion the correspondent propaganda channel NTV punched in the face male t-shirt with the inscription “Hold”. Journalist Nikita, Leonid Razvozzhayev was filming a story about the celebration of day of airborne troops. Suddenly he was approached by a man. “My country, bitch fucking, Ukraine grab fucking”, he said. After that, the reporter asked the man to shut up. In response, he punched him in the face. Rowdy was a 32-year-old Alexander Orlov. According to him, he participated in the fighting, but “not in Russia, and where Zakharchenko” (the leader of fighters “DNR”). Ultimately, the court sentenced him to six months hard labor.

Videoo, the celebration of Day of the commando live NTV beat reporter