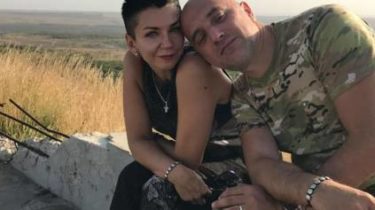 Russian writer and active supporter of terrorists “DNR” Zakhar Prilepin got married with his wife after 20 years of marriage.

The ceremony was held in the Holy Transfiguration Cathedral in the occupied Donetsk, wrote in Facebook Russian journalist Alexander Kots.

Prilepin: ment, the brand and the sauce wars

The wedding was attended by the leader “DNR” Alexander Zakharchenko with his wife, recently survived an attempt to “Minister of revenue DNR” Alexander Timofeev, nicknamed “Tashkent”, the singer Yulia Chicherina and others.

Guests presented Pilipino-automatic grenade launcher. Zakharchenko gave the writer the samovar, and his wife a gun “Stronghold” “produced by DNR”.

First, the guests gave Prilepin AGS (automatic grenade launcher). And here’s Zakharchenko gave his wife Prilepin gun “Hold” the production of the DNI. And Zahara is the samovar. So in the evenings to sing: “At a samovar I and my Masha”. pic.twitter.com/TerdDeEM9i

We will remind, the SBU opened a case against a Russian writer Prilepin who wants to capture Ukraine. According to kicker, the main goal – the conquest of Ukraine. According to the press Secretary of the SBU, the pre-trial investigation is conducted under part 1 of article 258-3 (participation in activities of a terrorist organization) and part 1 of article 258-5 (financing of terrorism) of the Criminal code.

Prilepin supposedly created on their own initiative the division, which, in particular, is going to conquer all of Ukraine. According to him, 90 percent of his battalion, “the men that fought” and allegedly the majority of “local”.

“I knew where to get these people. And we could, of course, to provide people much more. But said need a battalion. Gathered battalion. Now in Russia from among the companions and foremost is: you guys can take us, we want, we get. Comrades in various former political and parapolitical activity a huge number,” – says the latter-day Thriller.