Animal rights activists disrupted the trial of the butcher of Kiev 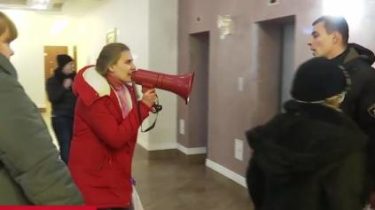 The trial of the accused zhivoderstvo tore the animal in the Shevchenkovsky court of Kiev. The defendants were Alexander King, said in the story TSN.19:30.

Two years ago, Moscow-based Internet forums have shown pictures of dead dogs, and the witnesses detained the man, who, in their opinion, poisoned animals in the Botanical garden. Activists gathered at the court, because I believe that the death of dogs – the handiwork of the King. “Our girls who took care of these stray dogs, caught by the hand of the King, when he scattered the dogs and poison for animals” – says Oksana Kostyukevich. A witness at the trial was the COP who made the arrest report. “It was late at night, in the dark. My partner and I explored the area, interviewed people who were there. They say: was the dog. But where did it go nobody knows,” – said Sergey Galchenko.

The defendant declares that he lives next to the Botanical garden, where a lot of dangerous dogs, but because he coaxed them with food, but not poisonous. And refers to the conclusions of the examination that in his favor. “Returning home, met this pack. I to quietly go, I have a feed to distract them,” explained King. The Prosecutor’s office refers to its examination – say, there were other sausages. “Toxic substances – isoniazid was in the stern, to which it refers, which was in his pack, and other type of dog food – the sausage, which, according to witnesses, he scattered,” – said the representative of the prosecution Paul Chernyshenko.

In Kiev, the knacker killed the dog men with disabilities

During a meeting of animal rights activists have not sustained nerves, and they began aloud to Express dissatisfaction. The judge announced the requirement that the troublemakers left the courtroom, and when the uproar has closed the meeting. The time span of limitations expire on the 9th of December. If before that date the court will have time to complete the review and acknowledge the King guilty, he faces a semi-annual imprisonment or a fine of 850 UAH.