His provoke, and video installation. Relatives to protect a second-grader, who keeps at Bay the school 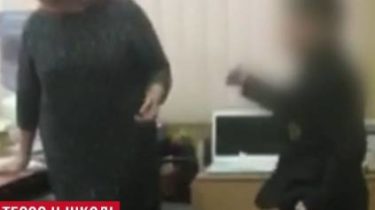 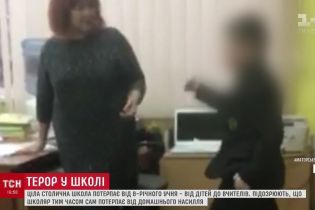 Classmates of the student 2-B class of school №247 Arthur’s parents are not allowed in school. They are afraid that the aggressive boy pounce on their children, says TSN.16:45.

“Tomorrow will come the children, and where is the guarantee that will not happen not just for a beating and an accident?” parents say.

The behavior of the guy took video. On one of the records the guy throwing books at classmates and teachers. On the other – the teacher protects the children whom Arthur tries to thrash itself is a fight. Also heard the guy swear.

“We can bring the word that we do communicate with the father. No requests to sit down, calm down do not work”, – said the Director of the school Tatiana Vishnevskaya.

The teacher tells Arthur that works at school 33 years. Such words from the child heard, for the first time.

“Very colorful way: cut the belly, pull out the internal organs”, – retells the words of the student teacher.

Arthur is now eight years old. Two years ago, died from the flu his mom. He remained with his father and grandmother. It mainly deals with his upbringing, and each day takes him from school. With the journalist of TSN grandmother spoke, but before the police were called. Due to the fact that I don’t want to take them off. According to family, Arthur deliberately provoke.

“Poison the child in order to surrender given”, – said the grandmother.

“He says we falsificare the behavior of the son that this is some sort of conspiracy. He does not want to understand that his child is in urgent need of assistance or medical nature or psychological nature,” they say in school.

Father Arthur novel on camera said that the video, which his son has peers and teachers is mounting. School and services he believes.

On the situation in the school know and the Board of education and the Department for children. And all almost unanimously recognize that in this situation, they are helpless.

“We have opened 12 criminal proceedings”. In Kiev, eight-year-old boy 1.5 years terrorizing the school

A few days ago service for children filed for Arthur’s father to court for the improper performance of parental duties. The first meeting will take place this Friday. The administration, therefore, the Novel can threaten only a tiny fine.

To take the child to force work with experts only after at least two decisions of the court about the improper performance of parental duties. In a situation with Arthur, this may occur in late winter. To force the father to take the child to a psychologist no court will be able.

“When Arthur next to his father, he behaves normally. As soon as it stays out of his father’s tutelage, his behavior becomes aggressive and uncontrollable. Why is this happening, unfortunately, we are teachers, and it can only say the experts,” the teachers say.

At school I suspect that Arthur can behave, because at home suffered violence. Eugene is a student in the 11th grade. Says, saw the father hit the boy right in the school porch. On violence in the family on condition of anonymity, TSN, and told the neighbors and relatives of the boy. However, no one has written about it the official statement. Say, just afraid of the Novel. So, no one service is the beating facts not checks.

Forced vacation for classmates of Arthur lasted for almost a week. Parents of children talking, the whole class will sit at home and further until, while officials will find a way out.