“Fluffy tour”: the Fox became a passenger on a London bus 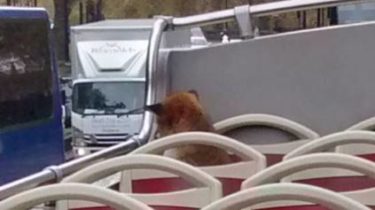 On 24 November, Black Friday on the second floor of one of the tour buses of London drove a Fox. Traveled animal, probably from the bus depot to one of the capital’s roads Park lane, while there it is not noticed by tourists.

According to BBC Ukraine, the bus stopped and shut down, to an employee of the Royal society for the protection of animals from cruelty Jill Sanders was able to catch an unusual “passenger”. Employees of the organization made sure that the animal is in order and returned to her home in the woods near the bus depot. Ms. Sanders noted that a Fox can travel in the bus, but all members of society were worried about her safety.

Foxes on the streets of London – not new for residents of the capital. According to National Geographic in the British capital are free to move about 200 thousand animals are hiding in the suburbs and live right in the center of the city. Network joke that Fox was on discount of Black Friday:

The problem of protection of animals on the roads is relevant in Ukraine. According to World Wide Fund for Nature in Ukraine on the roads will be “kaduki” – special passages in the form of bridges, which are applied in European countries from the last century. In particular, we are talking about the protection of wild animals that are most exposed to from the bus and railway routes: large carnivores and some herbivores.