“Fuss and feathers”. Poroshenko commented on the interdepartmental conflicts of the Prosecutor’s office 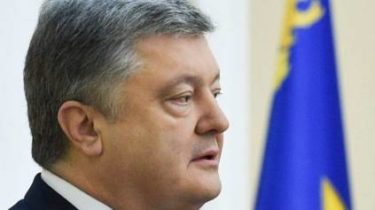 The interdepartmental conflicts of the prosecution is invalid, because the benefit only of a common enemy – crime and corruption.

This was stated by President of Ukraine Petro Poroshenko during a speech at the solemn event on the occasion of Day of prosecutors.

1.5 years of work: Lutsenko reported how much money and land the GPU back to the state

According to Poroshenko, the society prefers of war, corruption and other types of crime, not a war of compromising materials.

“Noise and feathers so many times that the action is reminiscent of a Latin American carnival… it would Seem ridiculous if it were not so sad. Bitterly, but correctly written in the address of the Group on 1 December: “it is Impossible to build a legal state, if men in uniform forget about his mission for what they have become on this post, and become irresponsible politicians. I, as President – just with society. A healthy rivalry, civilized competition, fair competition will welcome the President and the society. But conflicts, quarrels, intrigues and hatred are absolutely unacceptable because the benefit only of a common enemy – crime and corruption”, – he said.

The President also believes that no law enforcement Agency should not be involved in political activities.

“One way or another, but yours is the provision of an appropriate level of coordination and interaction of all the reformed and newly created law enforcement agencies. And I absolutely agree that Yury Vitalyevich (Lutsenko – ed.) said yesterday: “to Fight evil is impossible, illegal methods.” Only by adhering to this principle we can build a state of law” – summed Poroshenko.

We will remind, on November 29 it became known about detention of the agent of NABOO by the SBU, which had received permission from the GPO. We are talking about the transfer of 15 thousand dollars Dina Emahool, first Deputy Chairman of the State migration service. In the LCA stated that “for several months, agent of NABU, the son of former people’s Deputy from Party of regions Yury Boyarsky, executing illegal instructions of individual heads of NABOO, repeatedly tried to provoke Dean Prahova, offering large bribes for acceptance of illegal decisions on legalization in Ukraine citizens of Vietnam and Iran, which did not even exist in reality.”